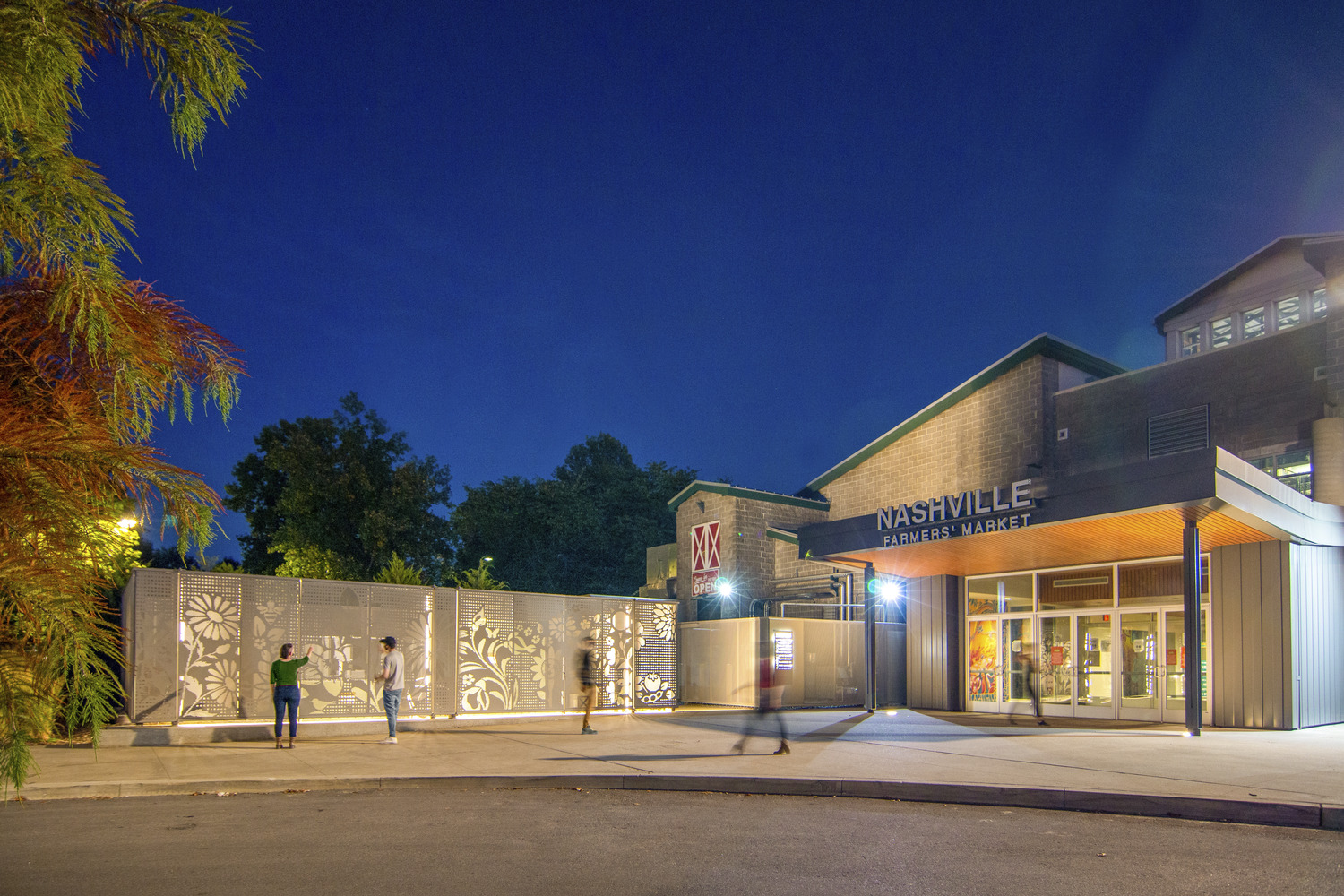 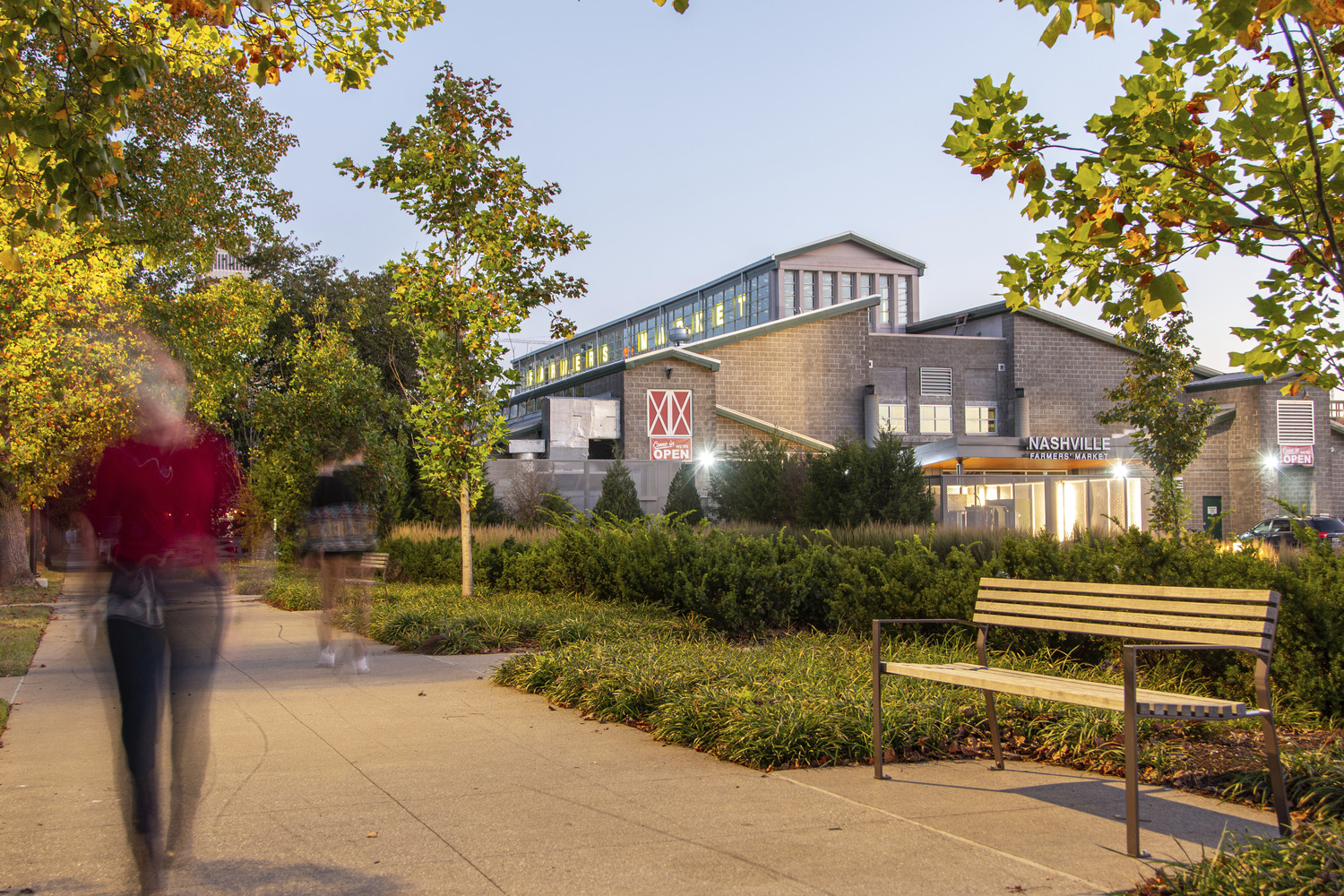 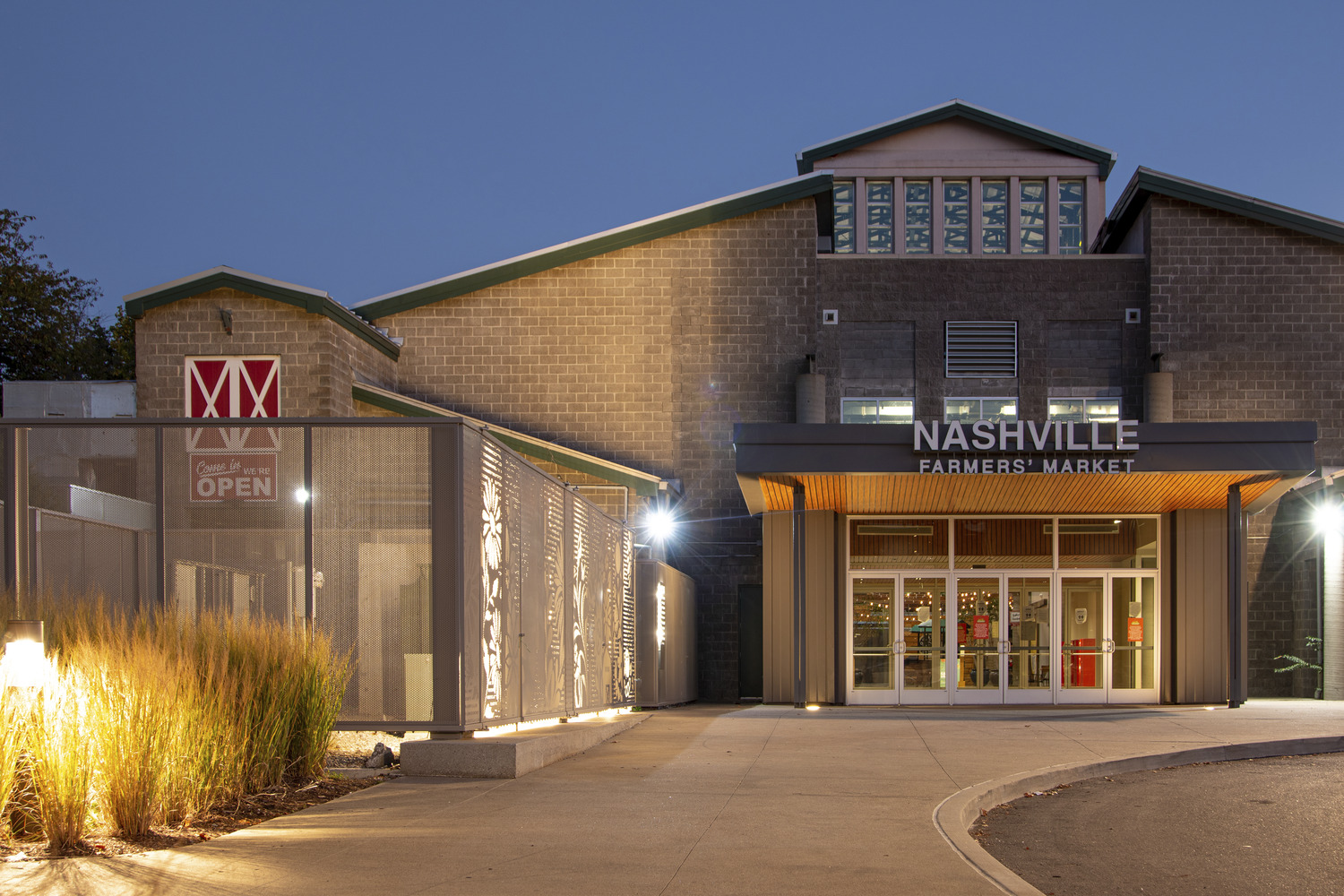 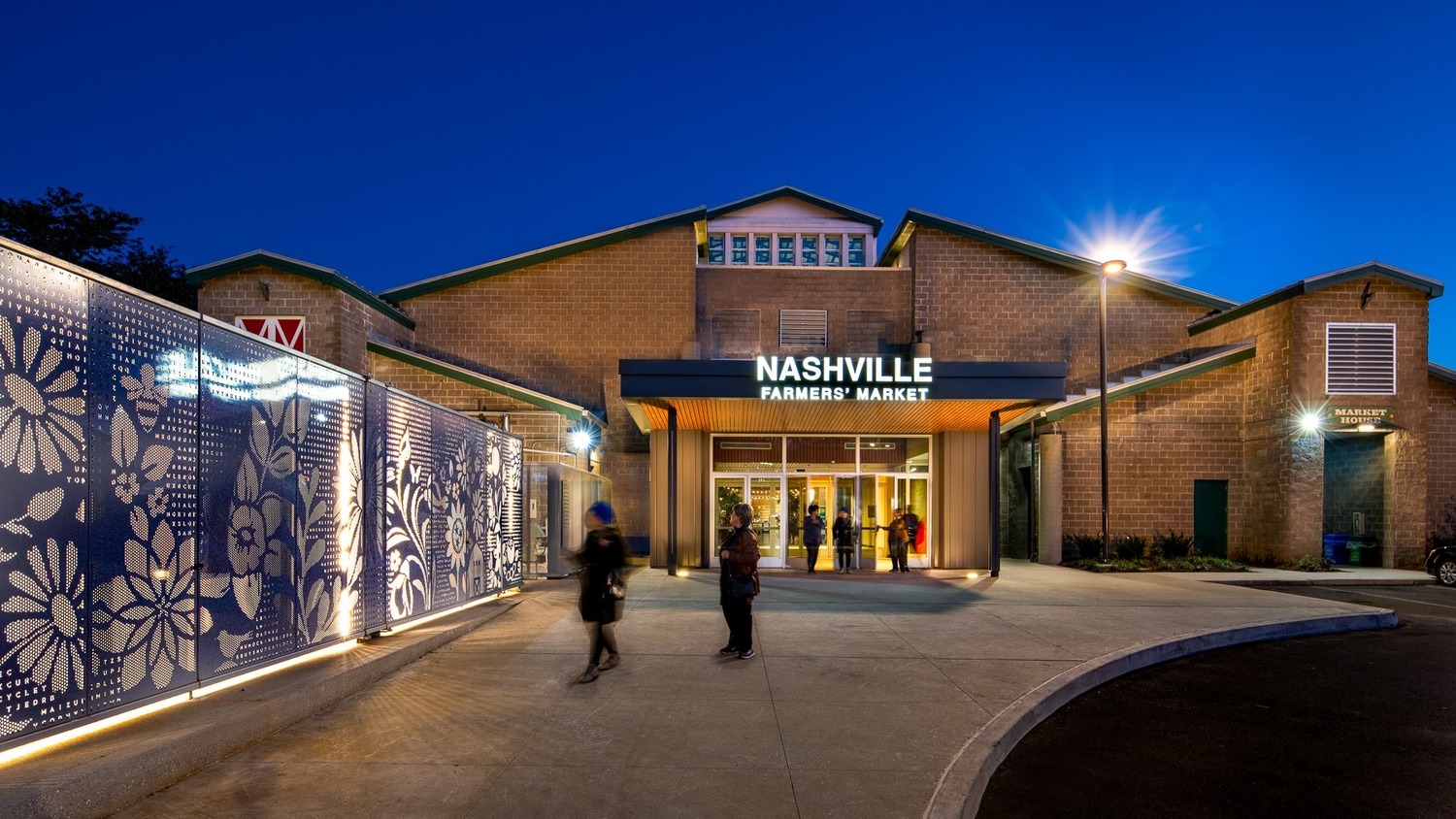 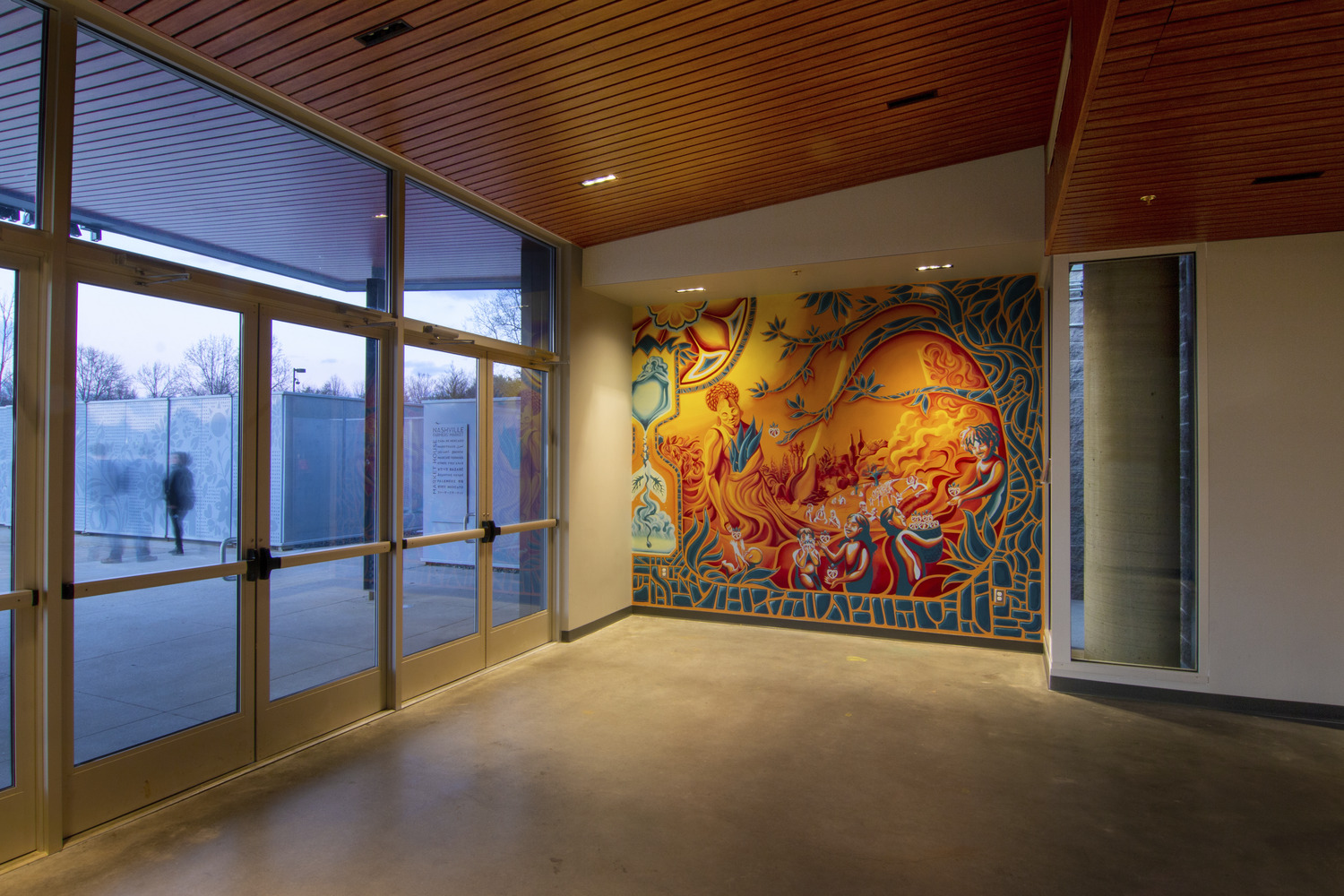 The renovation of the Nashville Farmers’ Market Grand Entrance transformed the northern and southern Market House entrances and now provides the community with an inviting space that celebrates the prominent history of the market. The Market’s north end, which was once a loading dock, now serves as the Grand Entrance and offers visitors a welcoming façade. Completed in January 2020, the design for this entrance incorporates public art, new signage, and an active-learning wall. The active learning wall was inspired by the Market’s concept of “Growing Together” and features vegetables grown in Tennessee, the state “Tristar” emblem, native flowers, and word searches in both English and Spanish. The wall is illuminated at night, serving as a focal point in an inviting plaza.

The building was initially completed in the mid-1990s and featured an iconic farm shed style design. Towards the end of 2018, the character of the urban site of the market radically changed due to the completion of the new Tennessee State Museum and mixed-use development along Rosa Parks and Jefferson Streets. GTG sought to enhance the Farmer’s Market entrance to capture the attention of museum patrons, CSA holders, local guests, and tourists. The design team has facilitated a thoughtful process through creativity, careful management, and oversight to create a beautiful project for generations to come.

GTG’s design also accounted for the Farmers’ Market Board’s goal of having the Market reach zero-waste by December 2020. According to the Market, prior to project completion the facility generated more than 100,000 pounds of compostable waste in an eight-month span. The new compost/recycling area significantly increases the capacity for compostable material containment and improved recycling.

The project awarded more than 70 percent of contracts to minority businesses. Tasha Kennard, Market Executive Director, says, “It’s important for us that as we grow, we’re building up our community and we’re utilizing local minority, women, and veteran-owned businesses to handle the renovation project here at the Market. We’re founded on a mission to support small businesses. That’s important to us as an organization.”